Spoiler alerts in my writing after “Project Nim” trailer video.
There is a scene in this film where we get to see a chimpanzee named Nim ecstatically run into the arms of what he knew as a former ‘owner”.
It had been over a  year since  Nim last saw this man. It had been a year since he was abandoned in a dark facility of caged wild chimpanzees. He had been very distressed when his “family” left him there. Now, someone returned for him. Or so it seemed.

You see, Nim was raised drinking soda  and accustomed to climbing into soft beds with his human siblings. He was used to getting birthday cakes, being tickled and even smoking a joint once in a while. He was raised as a human for an experimental study. He was successfully taught to communicate via sign language. He even gained a bit of international attention; not that it did him a fat lot of good for the years ahead.

When Nim jumped, screeching loudly, into the arms of this man, he literally started humping the man’s body. No doubt he was sure that he was going back home away from the brutal beasts he’d been forced to live with. Electric shocks of hope must have zapped through him the very millisecond his brain associated that man’s face with the faces of “loved ones” he obviously never forgot.

Nim never did go back home.

I smiled. I thought on how embarrassing it would have been for any one of us to hump the body of someone we were relieved to see again. With many of us being able to keep such instincts in check, I don’t doubt that a lot of us have felt such excitement. Sometimes, we jump or shout for joy when we’ve been rescued from certain awfulness . Sometimes, simple confirmation of someone truly loving us is enough to set our feet to dancing.
A sadness welled up as I thought on those of us familiar with that deeply shattering embarrassment associated with betrayal. That final break in faith after one too many exposures of naked enthusiasm.. for nothing. Our inability to erase our foolishness from the minds of witnesses, that shame of being used, as well as being “stupid”, making things so much worse..

Mercifully, being a chimpanzee, Nim was spared those particular salts in an already gaping wound.

Nim couldn’t help that his fate was in the hands of a  Combover Cassanova playing “sophisticated mentor” to vulnerable young girls. Nim had no support groups to go to, nor hotlines to call. He had no choice. At all. 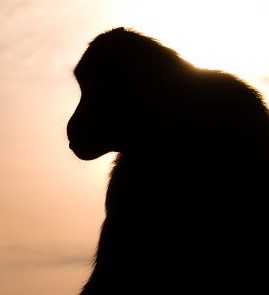 Thank goodness, we do. No matter how badly we are taken for granted or abused. Thank goodness we have choices as human beings.
May the story of Nim’s life remind us of our blessing of Choice
more frequently than it hints at what a cosmic embarrassment Man is.