It’s an unfortunate fall-out that I (and other women)have had to deal with for an entire lifetime. The anger of disappointments and rejections heard told by close male friends and acquaintances over the course of four decades. From men residing in different states and from multiple backgrounds.
It was something I accepted as a disturbing fact when I was a young and more attractive woman. I found it so “unjust” that I purposefully rejected certain men of certain statuses, on a few occasions, to keep myself ‘available’ for the “more normal” men that stole my heart and attentions.
It’s only when I got older (and developed into less of a sought after “prize catch“) when I started questioning it at all.

It’s not that I started believing that a massive amount of men were telling lies for attentions (goodness knows there were plenty enough of them and those type aren’t worth discussing). I’m referring to the good type of men that I , nor any woman I knew, wouldn’t have hesitated for a second if asked by them to go out on a date with.

I came to another realization because these were absolutely good men, nice looking men and although not CEOs of any particular companies, they stood on their own feet and asked no one for anything; it wasn’t making any sense that I was hearing these many stories of constant  rejections from unknown women.

Each story resembling others told, with the occasional growl or long faced bitterness when he (whomever it was at the time) would seem to be remembering the rejections.
A few of the universal complaints=
“If you don’t have a Rolls parked in the driveway or muscles bulged out past your ears, girls won’t give a guy the time of day.”

“It’s not like the majority of you women are swimwear models yourself, you know? It’s about time you ladies came back to earth and start thinking about whether you deserve to be so picky.”
To MANY women, these words will seem familiar.

To the men..I’m not angry. Not anymore.
As much as I was made to “suffer” for the “crimes” of what “women want” (much like men end up as whipping posts of suspicion in the midst of first dinner dates with embittered divorcees) it’s now clear as daylight what has been purposefully done to us.

No, there’s no more anger or frustration-only a saddened and enraged residue. Hand on my heart, any Man…not at “you”.

I believed it as a young lady because I hadn’t lived an adult life for more than a minute.
I couldn’t believe it as a grown woman because that’s not what I saw, heard nor experienced in my own life alongside dozens of friends and hundreds of casual female acquaintances.
I saw countless pairs of what this juvenile pop culture refers to as “mismatched” couples-so-called attractive females with not so attractive males.

From men with the big tummies to the skinny and slightly awkward men.

All shapes, from shy to outgoing, rich to not so much.

From construction workers to the unemployed, women (like myself) time after time would get together with a man if he was kind, smart and could make us laugh.

While in grade school girls can be haughty snickerers over someone’s discount sneakers, I was pleased to find, as grown women, that there was an agreed upon celebratory joy when one of us found one who simply “listened and loved to spend time” with us.

Now, I will admit that I rarely saw, with even the homeliest example of male, was the equivalent of a man proudly holding the hand of a big bellied, skinny and awkward or very poor female.

If I did, she was often the type with low self esteem. His disrespect of her and disappointment in her often seen by all as a major indicator of her “appeal” -an easy “fill in” for until he could find a “more suitable” mate. Once again, not the type of man we need waste time on.
In the cold language of social economics, men are most happy to trade “up” and women are known to trade “down” and still be content as long as the other factors include her being respected, protected and cherished.

Men-physical, Women-emotional; a fact that will always be nestled deep within our DNA no matter how many madmen molest our systems.

This is a well-known average fact.

Except in the movies.
Tv Shows. Videos. Songs.
Decades of media, coming to a  peak in the 70’s, churning out images of the well off, wisecracking and smooth-talking man with the perfect pecks and dimples.

NOT the average male by far. To make matters worse, the characters would often be sporting a lot of “dangerous bad boy” qualities besides. Another thing that is actually mostly seen on screen or limited to prison yards.
A certain female to male hostility “somehow” started polluting our entertainment. This spreading of the diseased “no money, no honey” kind of messaging was being worked and set into the psyches of one generation of adolescents into the next.

It has bugged me, until recently, as to how such a difference from my reality as a woman could co-exist with so many men and their stated realities of ‘rejections’.
I need you to read this section.

In case these pics “vanish” for no good reason, as they’ve been..

(a ridiculous habit {yanking pics} by simpleton establishment overseers  failing to realize that the more they erase the innocent information…the guiltier they look..never mind the unraveling of decades of work to seem “benevolent and legit”  by the unexplained erasure of unoffending material)

..I took time to write it out…because it is very important that we acknowledge the culprits of this calculated destruction and call them out; as  cowardly as they wish to be, glaring boo eyes from their dark corners.

“Factor II-Father
The man of the household must be housebroken to ensure that junior will grow up with the right social training and attitudes….
The advertising media, etc, are engaged to see to it that father-to-be.. (in the future..meaning Now)…is pussy whipped before or by the time he is married…..

(written in 1969, from document dated 1979..which anyone old enough remembers was not the case with the established male role)

He is taught that he either conforms to the social notch cut out for him or his sex life will be hobbled and his tender companionship will be zero…
He is made to see that women demand security more than logical, principled or honorable behavior…”

It is most sad deception because the AVERAGE and decent women on this earth ARE looking for nothing BUT logical, principled and honorable behavior…the way it has always and usually has been for hundreds of years. For the relatively good folk -not the ones allowing this infighting nightmare to darken our homes, workplaces and schools.

Despite the sham attempts of “studies” convincing girls that they are “boys” and men are “evil”, there are plenty of online bulletin boards from the grown up gals bemoaning the loss of what we knew as “our man”.

It’s also an ironically evil deception considering that it was primarily and mainly the devious work of tyrannically intellectual white men from the past and is now carried on by the tyrannically intellectual white male “liberal social warrior” ;professors in our universities and behind the cameras, lying through their teeth re “population control” to “save a planet”.
Save it for what?-when all are driven insane and function as laboring puppets-constantly anxious, confused and locked within prisons behind their eyes? Much like now, but worlds worse?

It’s the sickest and cruelest deception as far as warping the man’s mind and woman’s mind against each in the name of population control.

We need each other…so much. Nature didn’t pair us up merely on some cosmic whim solely for the purpose of sprouting offspring.
We each carry natural differences that complement each other. Differences which are vital to the human species.

Not being a dedicated heterosexual myself, the same respect and rules apply for same sex partners-the intimate and intricate differences of masculine/feminine traits that provide cooperative balance for one another. (Yes, the “gender/gay rights war” propaganda is also another disgusting device to keep us fighting one another).
These are differences that have helped us find comfort for thousands of years with and for one another. Default traits that have served as protection against outside forces when all we had to depend on was each other.
Precious things which are now being ripped apart as if by rabid beasts.

With us glaring at one another as the “evil-doers” when one can clearly see that these ugly things have been manufactured into us from elsewhere. With none of us questioning how in the world things got changed so completely upside down over such a short amount of time.

Irreparable damage has already taken place bio-chemically. To such an awful degree that they could remove the brainwashing aspects from media and the hatred and repulsion towards one another will continue.
One need only imagine the next ten years as our newest ASD victims grow into adult hood; it will be a nightmare of unprecedented proportions.

Our afflicted men will remain at home with the robotic synthetics and/or transgendered companions and the females will also be ‘forced’ into more homosexual relationships because the missing protection, kindness and once available desire the male held for them will leave them with a tragic emotional deficit (especially with the exploding numbers of schizophrenic diseases occurring amongst our females) without anywhere else to turn.
Both will be on State allowances, being told what to eat, when and who to have sex with, where to live and what to say and think. If you think I’m exaggerating…simply open your door. You know this is exactly where it is headed.

THIS WAS DONE ON PURPOSE.
SIMPLY because of the repugnancy these insane drunks feel over us “infecting the earth” with our babies.
It doesn’t get anymore hateful than that.

THIS WAS A PURPOSEFUL ATTACK AMONGST MANY other ongoing attacks that our politicians refuse to do anything about- except to verbally abuse us for being “ignorant” and keep shoving, sneaking and wordlessly herding us into the U.N. slave pens.

We need each other now more than ever.

There is NO law that should demand we make each other’s lives a living hell or tolerate it. It’s as stupid as saying a victim should shut up and lay down and be happy that he or she wasn’t murdered during a violent raping…when the crime shouldn’t have happened in the first place…and life ends up not being worth living anyway.

This is why we need to start fighting the animosity we are “seeing” from one another portrayed as “reality” from a traitorous media…for they damned well know, EVERYONE in the science community knows….the visual art in media is exactly how we frame our experiences re “who we are”. 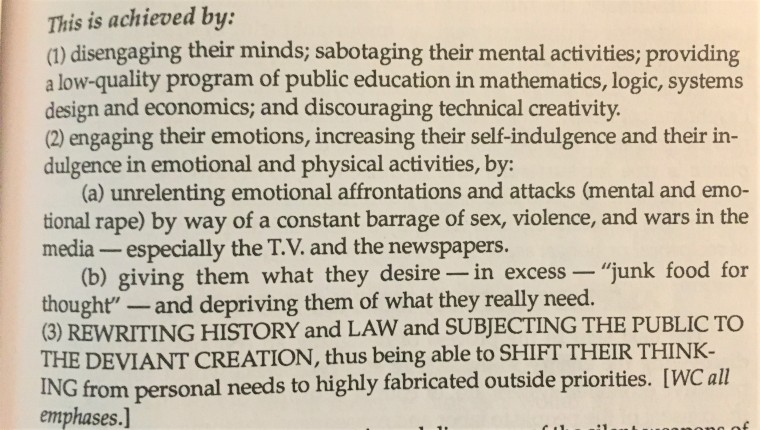 If this is a well-known thing (as it has been) then it’s damned near impossible to not see that it has been used against us.

(Per above…they SAID it would be. And not enough of us know this)