I have come up with a card game variation and I call it “Peeker”
It’s called this, in minor part, due to it presenting a poker element at the end of playing through the deck.
The rest of the game involves a sort of “peeking into the unknown’ -with each player drawing from a center pile and guessing what his/her card is before looking at it. 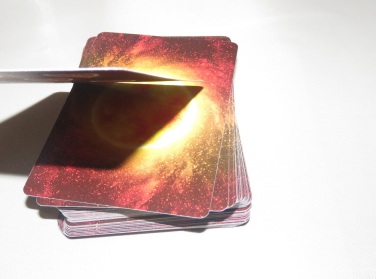 Here are the rules
1- A standard size deck is shuffled, cut and placed face down in a pile between both players.
2- With it being a guessing/prediction type game, each player should decide where to place wrong answers and the ones which were predicted correctly.
3- In other words, have enough space in front of you to separate your cards into two “hit” and “miss” piles.
4- Neither player needs to keep the cards visible after drawing, nor need they be organized for the other player’s benefit , for the duration of the game.
5- You can turn them upside down, after they’re revealed, if you choose to do so. Or you can arrange them into a visible spread. It’s up to the players to decide whether they’ll oblige one another’s requests to be reminded of what the cards were, but it is not a requirement.
6- It doesn’t matter who goes first.
7- The first player guesses out loud as to what card he/she thinks he/she will draw from the top of the deck, draws the card and then turns it over to be revealed.
8- After both players have seen the card, the active player keeps it and places it down into the designated “hit” or “miss” pile in front of him/her. Then the next player takes a similar turn.
9- This continues until all cards have been exhausted from the center deck.
10- Each player will be left with two stacks of spent cards in front of them.

(There’s no problem if the “hit” pile happens to have a greater number of cards than the “miss” pile; it only means you’re probably going to have more fun than you bargained for.)
11- The “miss” piles can be ignored from now on.
12- Gather up the remaining pile of “hit” cards and choose which five cards you want to finish the game with. You’ll be trying to create a winning poker hand.

If a player has twelve cards, then seven have to be discarded so that only five cards remain in hand.
13- If a player happens to not have a minimum of five cards left to play with, then he/she automatically loses.

And yes, ding- dang it, that means that the other player automatically wins, no matter what’s in their hand.

The following is a list of suggested categories of guesses that can be made
-Whether the card will be black or red.
-Whether it will be a specific number (without need for the suit to be specified).
-Whether it will be one of the four suits; clubs, spades, hearts or diamonds (without need to specify the number).
-Whether it will be a high card or low (royal cards being high, numbers as low. The value of an ace depending on players’ mutual agreement).
Guesses with both the number and the suit, declared before drawing, are only counted if both appear on the same card together.
Example-If I say “Five of diamonds” and the five shows up but it’s a spade instead, that is considered a miss. The same applies if a diamond turns up but the number is a four.
As the wise and old saying goes..
“Close, but no potato, Slick ”.
If I call three of hearts and only the three of hearts shows up, then it’s a hit.. a sweet and sassy one at that.

The player with the highest value poker hand (if run of the cards and luck provide), wins the game. 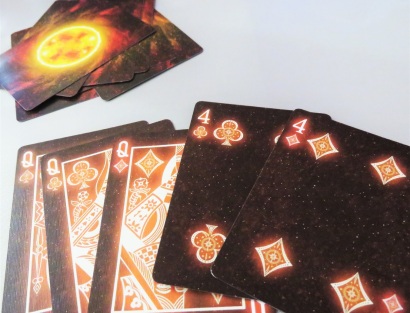 If one player has a traditional poker hand and the other doesn’t, the one with the poker hand wins.
If both were left with worthless hands, then it’s a draw.

From “Riverchasers” a handy chart of poker hands. 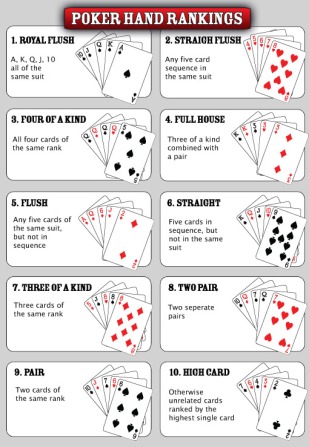 Although I carry a deep fondness for most of my creations, this one surprised me.
When I originally found it rattling around in my imagination, at most, I figured we would be dealing with a mostly lucky break and chance driven amusement; with the satisfying “at very least” of it being a decent sending and receiving exercise.
With the freedom to switch the category of your guesses whenever and how many times you want, mixed in with playful card counting on top of the open privilege of viewing the cards making their way into your opponents hand in hopes of a poker sendoff..it wasn’t too shabby; replay and all else involved.

If you do end up giving it a spin and enjoying it, then all will be that much more “swell” for me.. in a world where the once ordinary pleasures are fast becoming more appreciated.

Any pack of playing cards will do.

The pack I used tonight is one where my photo taking skills could not do them any proper justice-they’re so stunning up close- Bicycle’s deck of playing cards titled “Stargazer; Sunspot”.

Please note that I am in the process of creating a specially designed pack of cards and (fingers crossed) if the exact same idea hasn’t been claimed, referring to it  as
“Peeker”: a sending and receiving card game variation by Ramsy
should be in line with existing and upcoming copyright/patent homework, if one were so kind as to share it with friends on down the road or mention it in passing anywhere.

In the meantime, thanks for stopping by, be well and keep playing games…the good kind.