Dear everlovin’ gobs of bubble gum stuck in a ferret’s coat…man.
I’ve just spent two hours trying to feel my way through transferring a domain to a more familiar place….lost the original website page that it was connected to….and now I have to wait five to seven days until I can go back in to see if all is all right.
I THINK.

But I must admit that it’s been a very interesting journey since I started this around two months ago.
I rented myself a sweet little domain, all for my very own.
It’s called Vaxies.com
( I also scooped up its siblings .net, .org, dot-et cetera and onward.)

Even from the gate, it had an odd little limp to it (like many potential shelter adoptees tend to have).
For example, here… 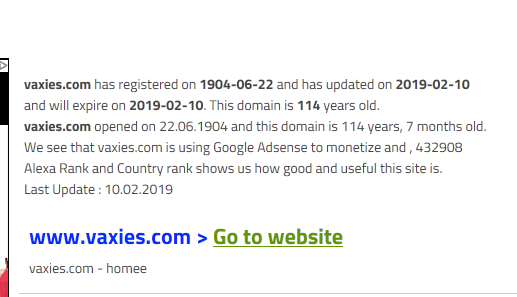 I’ve “only” been online since 1993, but if we did have computers in 1904 then I’m ashamed to say I must have been under the biggest rock in the deepest of comas to have missed THAT information.
Then, in my extensive hunt to make sure I didn’t step on any  copywritten toes,  I ran across these …

I found loads more months ago…but they seem to have vanished into the air since.
Oh wellsie.

The other good news is that I triumphed over my “flusterization” and completed what I needed for now.

As I fluff the pillows, I shall await the green light to restart my literary project..and share an example of the fiction that will be presented in the home of my dear little “Vaxies”
Coming Soon..

Definition of “vaxie” according to the unabridged Restored Heritage Dictionary
of the year 2145.

(Noun)
-term which originated as a typically affectionate colloquialism for a vaccinated individual with either beneficial or detrimental long lasting biological effects-primarily caused by historically mandated vaccinations.

Usually used in reference to the involuntary victims of the International Cybernetic Plantation Holocaust ; earliest roots from the early to mid 20th Century to its conclusion in the late 21st .
(Also see “Epi-Gate”-International scandal concerning the exposure and prosecution of epidemiological high crimes which spanned, in total, four decades including the end of the 21st century and beginning of the 22nd.)

In the meantime…Hugs and Kisses

← It’s About Our Children. That’s All.
What About This Incitememnt? →